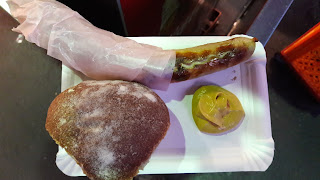 From Bratwurst in Bavaria to Kubasa in Kiev, many cultures have some version of what Americans have, with winning brio, called the hotdog: a convenient and tasty arrangement of processed meat held in a bun designed specifically for the job and topped with dressing, making for a macronutritiously balanced package that carries well in one hand.  Not so in Switzerland.  Why?

On a visit to Switzerland, the ambulatory omnivore is confused to discover that ordering a cervelat - sometimes referred to as The National Meat - yields a perplexing plate on which a dollop of mustard stands lonely next to a crusty roll of bread and a sausage partly wrapped in wax paper.  This makes eating a complex operation requiring two hands, careful attention to tripping hazards, and a tenuous calculus to ensure that the bread, meat and topping are depleted at roughly equal rates.


This state of affairs seems altogether out of sorts for a country well known for its efficiency.  Why make it so much extra work to eat a simple cylinder of spam on the go, when so many other better examples exist?

Here already the alimentary anthropologist has discovered the key.  The justification for the sausage-in-bun arrangement so common in other countries (ie., that it is a labour-saving adaptation) is moot - and even possibly bad - in Switzerland.  Among the Swiss the goal, we should remember, is almost never to work less.  The labour-intensive Swiss version of the hotdog, therefore, is already perfect: it contains all the required elements, and a hefty bit of Calvinist sweetener.

So it is that the crucial addition to every Swiss sausage is not only mustard, but hard work.
Posted by How To Be Swiss 16 comments:

The Swiss love their public fountains. In fact, it is said that they have more of them per capita than any country on earth.  Why?

We have already established the uneasy relationship that the Swiss have with urban life; despite the country's many outward trappings of modernity, there lies beneath the glass and steel surface of Switzerland a massif of sylvan tranquility.  The public fountain - usually hewn from muscular slabs of solid rock - is its urban outcrop.

These mountain mainsprings, then, tap right into the Swiss vein. Even in the midst of the hectic city or the cookie-cutter suburbs, the dehydrated wayfarer doesn't just get a drink but a reminder that, close by, the Alps continue to send their glaciers tumbling groundward, giving the country its life, its safety, its identity. Just like wearing a Freitag bag connects the patriotic Swiss commuter to her country's industrial sinews, so her local drinking fountain taps into Helvetia's lifeblood.

So it is that public fountains in Switzerland don't actually serve to quench the thirst of any one individual, but to reinforce the very idea of Switzerland as a nation and a concept.  By partaking, the parched pedestrian in fact lends support to this shared concept, ingesting a bit of its shared Swissness and buttressing the bond between people and place.

Posted by How To Be Swiss 2 comments:

How To Be Swiss
Welcome to HowToBeSwiss, home of the anthropology of everyday Swissness. Through the tried and tested field research techniques of classic anthropology, we help you decode the mysteries of Swiss culture. Learn more about our resident anthropologist, Mike Callaghan, here: https://lshtm.academia.edu/MikeCallaghan